Established in 1673, Casco Viejo is the historical heart of Panama City. Churches, plazas, crumbling houses and restored buildings turned boutique hotels share space in a very noticeable rapid transformation since my first visit in 2004. A decade ago I contemplated buying real estate in Casco Viejo falling in love with the architecture and history of the neighborhood. I am kicking myself for not following through as it is not surprise that so many other people saw what a beautiful area it is. I just hope all the families living there will be able to stay in their homes.

Tucked away in Casco Viejo Las Clementinas is a hotel and café built in the 1930s by Clementina Herrera and her daughter Clementina Jaén. According to their website:

The site sits on top of the original city wall built by the Spanish in the 1700s to defend Casco Antiguo from attack, which was dismantled in the booming 1850s to make way for more development. After Doña Clementinas jewelry shop moved, the downstairs commercial space (now the Café and Bar) were leased to the National Police, whose nearby station known as “La Secreta” (the Secret Police) was notorious during the dictatorship. Directly behind the building is a garden, sold at the turn of the century by the Government to Ramon Arias Feraud with the express restriction that the lot never be used “other than as a garden for the conservation and embellishment of the city.” And so it shall remain…

The Palm Garden in the back is situated against an original fortress wall and the other side is the Secret Garden and private dining space. 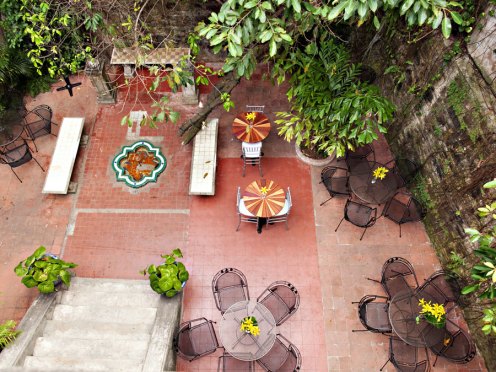 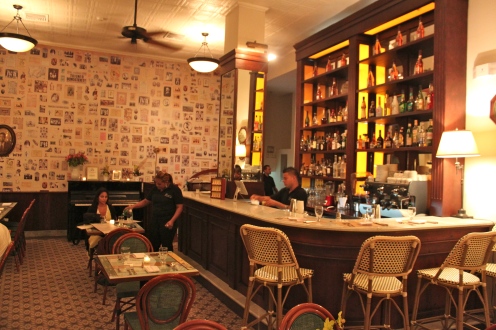 The service is excellent and the food is house made with produce coming from their garden and fish from the market about a half a mile away that comes in daily.

Of the many ceviches I had in Panama the corvina with passion fruit (maracuyá) and micro cilantro was the best. The acidity of lime, salt and sweetness of the passion fruit was a magical combination that melted in my mouth.

The hearts of iceberg lettuce salad was refreshing with the oven roasted beets and braised leeks adding a nice bit of earthiness. 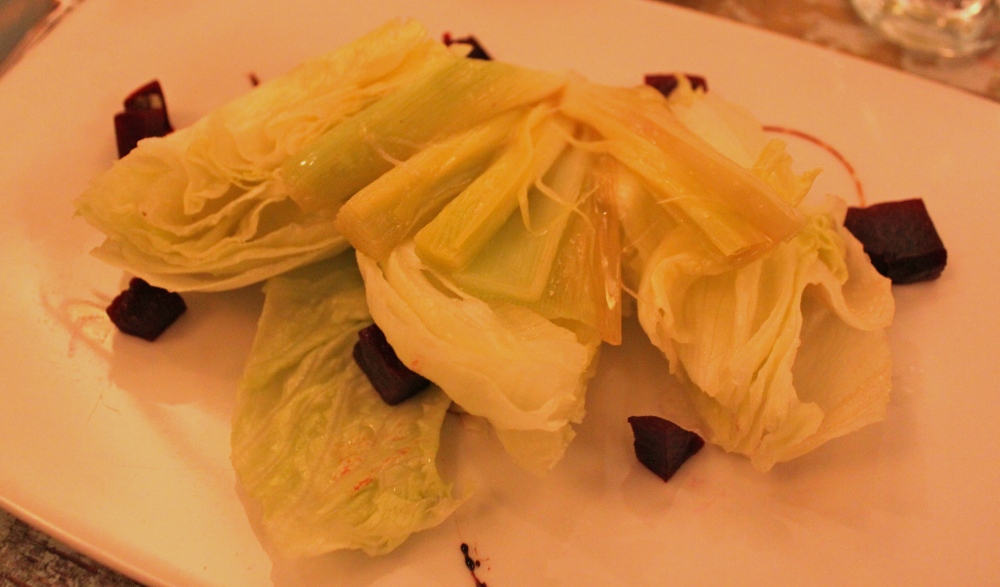 I am a huge fan of quinoa and lentils so I happy to find both in one dish. I stuck with fish and had the Corvina over warm salad of quinoa, Pardina lentils and walnut sauce. The mild slightly sweet tasting fish was cooked perfectly and paired well with the heartiness of the lentils and richness of the walnut sauce. I was a member of the Clean Plate Club.

A generous portion of grilled thick cut pork chop was served with roasted squash and uchuva chutney. Uchuvas resemble yellow cherry tomatoes and are similar in texture but have more of a sweet tart flavor.

We enjoyed a nightcap in the Palm Garden while rehashing what a wonderful meal and wishing we would have booked a room at the hotel. Next time.