Foreign Cinema has become a San Francisco standard and for good reason. Gayle Pirie and John Clark have consistently served tremendous and inventive California/Mediterranean influenced food on an almost daily changing menu. Several options went through my mind when I was thinking about where to have my bachelorette dinner but Foreign Cinema won out with its great venue (foreign and independent films shown nightly), atmosphere and of course food.

Let me stop here and say that all the dishes we had were great, beyond great in fact, but the big take away and the main reason I am writing this post is two things:

The Lacinato kale Caesar salad and the sesame fried chicken. Run; don’t walk, to Foreign Cinema and order both of these.  You’re basically crazy if you don’t. Can you tell I am feeling a little passionate about these dishes?

Kale, eeeveryone is eating it these days, I know. However, this salad will change your life. Comparing this Caesar salad to a traditional Caesar salad is like comparing the newest HD TV to the one your parents had in 1990. Okay, so what’s in this magical dish: Lacinato kale, Caesar, radishes, Sibley julienne, garlic croutons, Manchego. The croutons are just garlicky enough, super crunchy and have to be homemade. The radishes give it a crisp lightness to balance out the dressing and whatever Sibley julienne is, it’s working. I. Did. Not. Want. This. Dish. To. End. 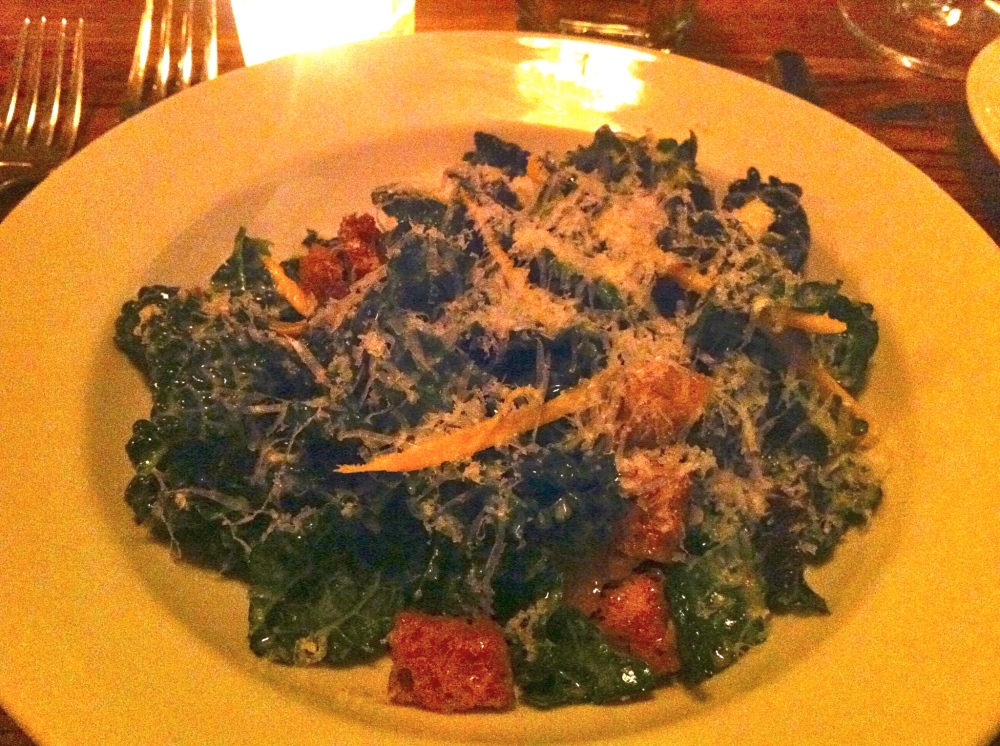 Just when I thought I met the love of my life a HUGE plate of chicken was given to me. The serving size was amazing and a good thing because once everyone tried it, they came for second, thirds…. No one could believe how good all of the flavors were and how flippin’ crispy it was. Sesame fried chicken: Bloomsdale spinach, celery root, sultanas, pine nuts, ras el hanout spiced honey.

Okay, are you still with me or did you already head over to Foreign Cinema? I think the last time I ate brandade was probably in Spain when I was feeling adventurous and/or didn’t know what I was being served. We all shared the brandade gratin: whipped salt cod, potatoes, garlic, chilies, with breadcrumbs; grilled bread. Wow, this was rich and a great appetizer to share with the table. Not fishy at all and the chilies gave it a nice punch. The bread was grilled to perfection.

Another salad that was really good but hard to compete with the kale Caesar was the Martin’s arugula with marinated beets, fromage blanc, apple cider-Champagne vinaigrette. That vinaigrette was heaven and was a nice added touch to your run-of-the mill beet salads that are on every menu.

Not pictures are the oysters that were devoured by the people who ordered them. Suffice it to say, these come highly recommended if you like oysters.

Not on the menu: Lemelson wine. My friend is a winemaker at Lemelson Vineyards and rolled into town with a case of wine for our dinner. Last year the New York Times rated their reserve chardonnay #1, which I wrote about here. Needless to say our drink held its own with the food. 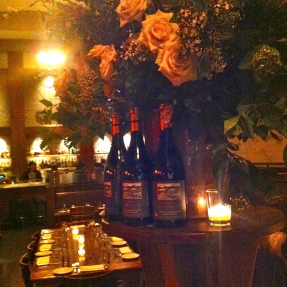 We ended the dinner with a grapefruit-mint granita, the perfectly sweet palate cleanser. Until next time Foreign Cinema.